Creating rotas without the aid of rota planning software can be a bit of a nightmare.

Schedule too many staff for a shift and you end up paying people to stand around. Schedule too few and you risk providing sub-par customer service — not to mention overworking your staff, who might decide to take their skills elsewhere.

But even when you've spent hours poring over your rota and making sure that you have the right number of people in the right place at the right time, that same sheet of paper can cause all manner of HR headaches once it's up on the wall.

With this in mind, today on the RotaCloud blog, we're switching seats for a while and taking a look at the world of rotas through the eyes of the employee.

Check out these nine common complaints that staff make about their work rotas and things their managers do when scheduling staff — as well as our tips for how to avoid them.

1. Your rotas are messy or never follow the same format

It’s the rota planner’s job to make sure that the staff schedule is easy to understand at a glance. Changing the layout from week to week or suddenly switching colour schemes will only cause confusion, and could even result in staff missing shifts or coming in when they’re not needed.

Whether you’re using dedicated rota-planning software, an Excel spreadsheet, or just plain old pen and paper, it’s important that you keep your rota tidy and stick to the same format from one week to the next.

Keep your rotas simple and tidy, and stick to a format that works — it’ll make everyone’s life easier.

2. You share your staff rotas at different times each week

It’s no fun hanging around waiting for your boss to finish next week’s rota. It’s also no fun being pestered by your employees when you’re frantically trying to fill all the gaps in your schedule and avoid clashes.

Decide a day of the week for your new rotas to come out and stick to it like it’s the deadline for your tax return. Your staff will thank you, and it'll help your business run more smoothly.

3. You leave it too late to publish the next rota

As well as sticking to a routine, it’s important to prepare and share your next rota well in advance of the current one ending.

If you frequently find yourself working on your next rota with less than 24 hours to go before it's needed, then you risk making costly staffing errors.

You’re also more likely to have to make changes to the schedule once it’s up since staff — eager to make their own plans but with no idea when they'll be needed in work — will inevitably come to you with requests for changes.

Your employees will quickly grow tired of having to wait for their manager to tell them when they're next required to work, so ensure that you have at least three or four days between the day you release your next rota and the day the existing one ends.

4. Your rotas aren't built around your staff

No matter how much you hate planning rotas, filling empty shifts with the first name available is a surefire way to end up with disgruntled employees.

If you know that it takes one of your staff almost an hour to get to work, for example, then it might be kinder to give them shifts later in the day rather than asking them to open up the shop in the morning. If you know that one of your employees is a student and has lectures early in the morning on particular days, try to keep them off late shifts the night before.

It may take a little longer to plan your rotas this way to begin with, but it will save you a lot of headaches down the line, and your staff will be more likely to stick around. 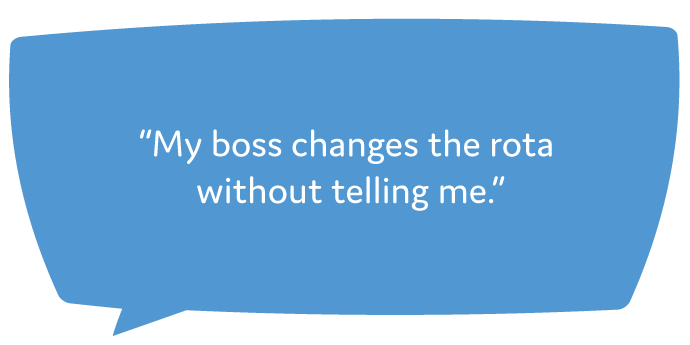 Even the best rota planner has to make changes to the schedule on occasion. People call in sick; your system suddenly goes down; a big party books in on an ordinarily quiet night and you need more hands on deck.

But changing the rota once it's been sent out should always be a last resort. And if you do make a change, it needs to be communicated to the staff it will affect as far in advance as possible.

Making your employees aware of a change to their schedule can be as simple as giving them a call them at home, popping a memo in their pigeonhole, or, if you use rota-planning software, setting up automatic push notifications to be sent to their phone as soon as you tweak the rota.

Whatever method you choose, give your staff plenty of notice of any changes and be flexible if your revised rota doesn't work for everyone involved.

6. Your rota isn't easily accessible by your whole team

A common problem when using a paper-based rota is that staff who aren't around when it's put up will have no idea when they're next in.

Employees calling in to ask for their next shifts is common in some industries. But take five, ten, twenty calls like this for every rota you produce, and you and your team will end up wasting a phenomenal amount of time each year — not to mention potentially missing calls as your staff tie up the phone line.

There is no tried-and-tested workaround for this problem if you're sticking to pen and paper, but managers using Excel or Google Sheets for staff scheduling can send their finished rotas out to their entire team via email (be sure to send out the new version each time you make a change, however).

Online rota software, meanwhile, will do this your behalf once you publish your rota — and will even keep staff updated if you make a change later on, so it's worth considering if you haven't already.

7. There's no system in place for requesting shifts

Lost, forgotten or ignored shift requests are a major bugbear for staff, and can sap morale faster than a no shoes policy in a drawing pin factory.

It's impossible to please everyone on your team the entire time, but it's a good idea to have a set way for your staff to request particular shifts and to try to work around them when planning your rotas.

Your system could be as simple as asking staff to write their names in red or green ink on a blank rota to indicate the shifts they'd like to take or would prefer not to work. Or perhaps you could enforce a "requests via email only" policy and have a cut-off point each week. Taking requests in person, however, should probably be avoided as the details often go forgotten.

Whatever method you choose, stick to it and make sure that requests don't go ignored. Even if you're not always able to honour them, taking a moment to acknowledge a member of staff's request will rarely go unappreciated. 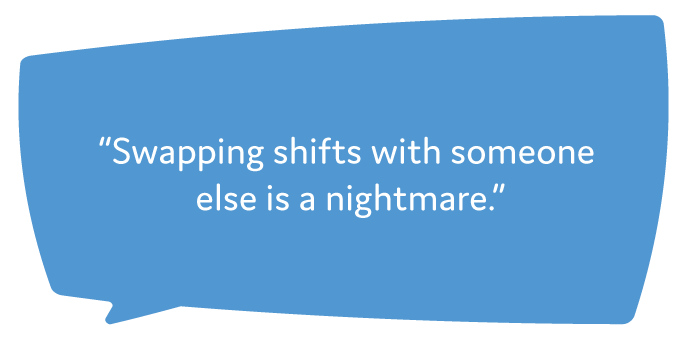 8. You rule your rota with an iron fist

We get it — you worked hard on your rota and you don't want anyone to mess around with it.

Provided that they don’t make the final changes without your consent, however, it’s often easier to let your staff negotiate shift swaps between them rather than insisting that staff come to you first.

Tweaking your carefully crafted rota can be frustrating and time-consuming. But consider how much easier it would be to approve a shift swap organised by two of your staff than to have a single member of your team tell you that they can't work their shift and leaving it to you to find a solution.

One of the features we’re most proud of at RotaCloud is that our app allows staff to request a shift swap with a fellow employee simply by selecting the shift they want to trade and then tapping on a fellow (eligible) employee's shift to send them a request to swap.

If the second employee agrees to the switch, then the rota manager will receive a notification alerting them to the proposed change. All they then have to do is tap a button to allow or deny the swap, with everyone involved automatically receiving an updated version of the rota — no texts, emails, or hastily scribbled notes required. 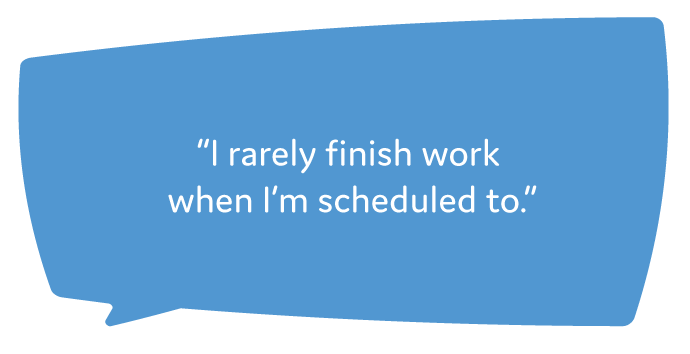 9. You don't stick to your own rota

A common complaint from staff who work to a rota is that their boss expects them to follow it, but ignores it whenever it suits them.

"Even if I was scheduled to finish at five, my manager would very often tell me that there was still work to be done, and I'd be stuck there for an hour or more," a friend of mine once told me when discussing job he'd had while studying at university.

"If I ever pointed to the rota, she'd flatly tell me that 'the rota is just a guide' and that finishing times weren't set in stone."

You wouldn't allow your staff to roll in half an hour later than they're scheduled to start work, so by the same token, it's not fair to ignore their agreed finishing times just because the place is busy.

Most employees will be happy to stay late every so often if it means making a bit of extra cash. But your staff will only respect your rota if you stick to it yourself.

If you routinely find yourself shorthanded at certain times, then it’s probably time to head back to the drawing board and adjust your staff’s shift patterns.

Staff scheduling is a far more complicated matter than it looks on the surface.

But with a little consideration and a system put in place for getting your finished schedule into your team's hands and for making changes, it can be the backbone of your day-to-day operations.