Wedding and events venue Hoyle Court chose RotaCloud as a simple, user-friendly approach to managing rotas and improving communication between managers and staff.

Hoyle Court is an exclusive wedding and events venue run by Arden Management. With a large mansion house, a lounge licensed to host civil ceremonies, and a bright and airy dining room seating up to 120 guests, Hoyle Court has both the capacity and flexibility to cater to a variety of events.

When Events Manager Max Collishaw took on the responsibility of organising the Hoyle Court team’s shifts, he quickly found that the pre-existing system of pinning a handwritten rota to the staff noticeboard was fraught with problems.

“The biggest challenge we faced was notifying staff,” Max told us. “Updating the rota got very messy, and it wasn’t possible to look forward more than a week.”

This prompted him to start looking for a better way of doing things. 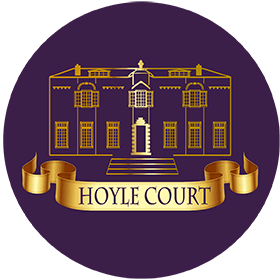 While on the hunt for a rota-planning solution, Max spotted RotaCloud. The main reason it stood out from the crowd, Max told us, was because of its simple, user-friendly appearance.

“I really enjoy the visual aspect of RotaCloud. It’s very clean, bright and colourful — miles away from a black-and-white table that’s been filled in my hand.”

Visual elements aside, however, RotaCloud being entirely web-based also appealed to the Hoyle Court team.

“The cloud-based system is great,” Max said. “The fact that staff can log in using the phone app to check shifts is a massive bonus.”

“The ability to edit on the move using the app or quickly log on and edit shifts is great. Allowing staff to submit holiday requests [via the app] has created a much better system than filling in request forms and keeping track of holidays used.”

“We can also look further ahead at the rota and identify staffing issues sooner,” he added.

Overall, though, Max said that he was most pleased with how much time RotaCloud saved him.

“RotaCloud has had a huge impact on the time we spend planning rotas. Rotas are now planned two weeks ahead [and] staff can look further ahead at what shifts they will be working.”

“All staff are on contracted hours a week [so] the ability to track hours is a huge bonus. Before, a weekly spreadsheet had to be completed. Now using the reports section, it is all just a few clicks away. This has saved so much time.”

His team, too, took to RotaCloud straightaway.

“The staff love using the app. They can see what shifts have been published and look ahead. It gives them more control over when they are working so they can better plan time off. It’s much easier to find out when casual staff can work — using the app, we can publish open shifts for them to take, saving endless phone calls to staff members to see if they are free or not.”

“RotaCloud has allowed me to spend less time planning rotas and more time meeting clients and pushing the business forward.”

It sounds like a marriage made in heaven to us...