Clark’s Bakery use RotaCloud to organise more than 120 staff across 14 sites, as well as managing annual leave and boosting staff accountability with secure clocking-in.

Clark’s Bakery is a third-generation, independently owned bakery chain based in Dundee, Scotland. Operating 24 hours a day, seven days a week, the company has 14 stores, and provides fresh-baked goods to shops, universities, and petrol stations.

With 126 staff across a wide variety of roles including bakers, drivers, shop assistants, and office managers, organising the Clark’s Bakery team is also no mean feat.

We spoke to Wojciech Waskowiak, Area Manager at Clark’s Bakery, about the scheduling and attendance problems the business had been facing previously, and how RotaCloud has helped to solve them.

“We used to use just an Excel spreadsheet for our rotas,” Wojciech told us. “But after about half a year of doing it, I was like, ‘This is an absolute nightmare.’”

Staff working across different locations was also becoming a problem.

“Some of our staff migrate between shops, but as soon as one person takes a holiday or calls in sick, we need to fill that gap quickly and know who’s free to fill it.”

This, Wojciech said, would often lead to confusion, resulting in some staff not showing up for their shifts.

“There were constant issues with the rota,” he said. “Every time there was a change, I had to text the relevant person or phone them, but sometimes they’d say that they never got the texts.”

Keeping track of the hours staff worked and managing their annual leave was also increasingly problematic.

“People would fill in their timesheets at the end of the week and use a holiday sheet to request time off,” Wojciech explained. “The shop manager would then send the folder to me, and I’d go through all the timesheets and requests manually.

“But sometimes things would go missing, and holidays weren’t recorded,” he continued. “People thought they’d got the days they requested even though they didn't get confirmation, and then I’d end up with three people off at the exact same time.”

Desperately in need of a better way of planning his team’s rotas and managing their annual leave, Wojciech set to Googling — which is when he discovered RotaCloud… 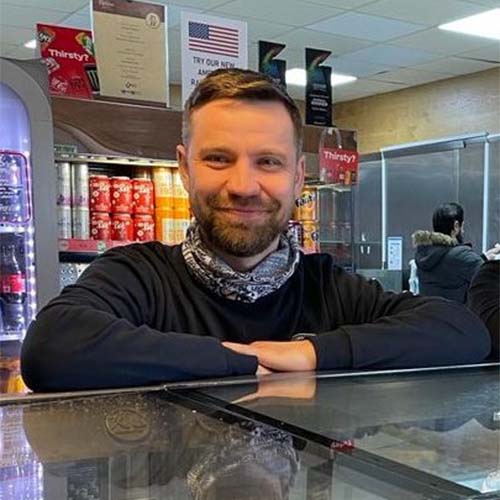 I did try other apps, but as soon as I tried RotaCloud, I was like, ‘This one’s for me!’

Soon after signing up for a free trial, Wojciech and the Clark’s Bakery team knew that RotaCloud was the solution they’d been looking for.

“I did try other apps,” Wojciech told us, “but as soon as I tried RotaCloud, I was like, ‘This one’s for me!’”

“it just had everything I needed,” he added. “Rota planning, holiday requests, clocking in… It’s all there.”

The RotaCloud mobile app in particular has solved a number of the problems Wojciech was having in relation to communicating shifts.

“RotaCloud has made things so much easier,” he said. “Everybody gets the rota; there's no excuses.

“Whereas previously, staff could say, ‘Oh, didn’t see [the rota]’ or, ‘I took a picture of the rota, and that's not what it says!’, now everybody gets a notification on their phone whenever there’s a change, and they can see it anytime.”

Staff clocking in and out of their shifts via RotaCloud has also made life easier for the chain’s payroll manager.

“Ewa, our accounts manager, can now get everyone’s hours straight from RotaCloud instead of going through paper timesheets every week. It’s made the process so much smoother,” Wojciech explained.

But what about the staff themselves, we asked. What do they think about RotaCloud?

“Honestly, everybody praises it,” he said. “Newer people don't realise how it used to be before, but people who’ve worked here for years always say, ‘Oh, it's miles better’.”

For Wojciech, however, by far the biggest benefit to using RotaCloud is the time it saves him.

“I don't even know how I used to manage without it,” he told us. “The time savings are huge; there are a lot less mistakes than there used to be.”

“When you pay for something, your bosses will always ask, ‘Do you really need this?’” he continued.

“But when I think back to how we sometimes used to drive past some of the smaller shops at 3:50pm and see all the lights out, but on the timesheet everybody said they’d finished at four… And now we can see exactly what time people start and finish their shifts… Then when my boss asks if we need RotaCloud, I say, ‘Yeah, definitely.’”