It's easy to forget about poor old Mother Nature when you're busy trying to change the world. You've got bills to pay, customers to serve, and books to balance. You haven't got time to sort your rubbish and go around switching lights off.

But the thing is, even if you don't care about saving the planet, going green could actually save your business hundreds, if not thousands of pounds every year.

Today on the RotaCloud blog, we're sharing with you a list of ten tweaks you can make to your office and working lifestyle to make your business more cost-effective while being kinder to the environment. 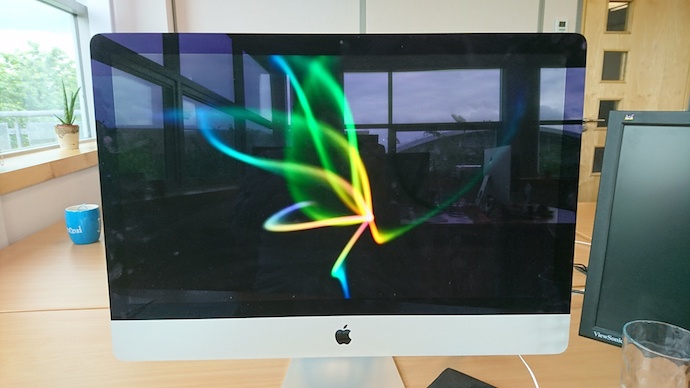 Back in the days when people used chunky CRT monitors, it was possible for images to become burnt into the display if they remained on-screen for long periods of time. Screen savers did exactly what their name suggests: prevented the screen from being damaged by switching to a constantly moving image if the computer was left idle for a long period of time.

Today's monitors don't suffer from this problem, but screen savers still exist for entertainment purposes. While screen savers don't (usually) cost any more money than an in-use display would, they nevertheless prevent your monitor from shutting off when it's not needed.

A typical LCD monitor uses between 20–40 watts of electricity when in use, and the same applies for displaying 'screen saver' images. In standby mode, however, that drops down to around two watts...

So ditch the screen savers and set your monitors to switch themselves off when they're not in use. Your wallet, and the planet, will thank you.

2. Use the kettle with caution

It costs about 3p every time you boil a typical two-litre kettle. Given that the average office makes four or five rounds of tea or coffee a day, it's easy to imagine how these costs could add up over time.

You can keep costs down by using an energy efficient kettle (more on that later), but even more important is to boil only as much water as you need.

Encourage your staff do this by purchasing a kettle that makes it easy to gauge exactly how many cups it will make — and make a habit out of doing tea and coffee rounds rather than everyone popping the kettle on just for themselves.

Finally, don't fall into the habit of filling and boiling the kettle as soon as you've finished with it.

This wasteful practice has become worryingly common in offices around the UK, with the thinking being that popping the kettle on to boil when you've finished with it ensures that it's always ready for the next person. In reality, however, people end up boiling the same water over and over, with much of it going to waste.

3. Turn the heat down by one degree

You want your staff to be comfortable in winter, but turning the office thermostat down by just one degree could make a big difference.

How big, exactly? Energy UK reports that a single digit drop "could cut your heating bills by up to 10 percent and save you around £85 a year.“ That's an awful lot of money for a barely perceptible drop in temperature.

If you use air conditioning during the summer months, meanwhile, don't make the mistake of turning your office into a veritable walk-in refrigerator. The goal is to make your office comfortable when it's hot outside, not to have your staff reaching for their cardigans whenever they come indoors, so go easy on that dial. 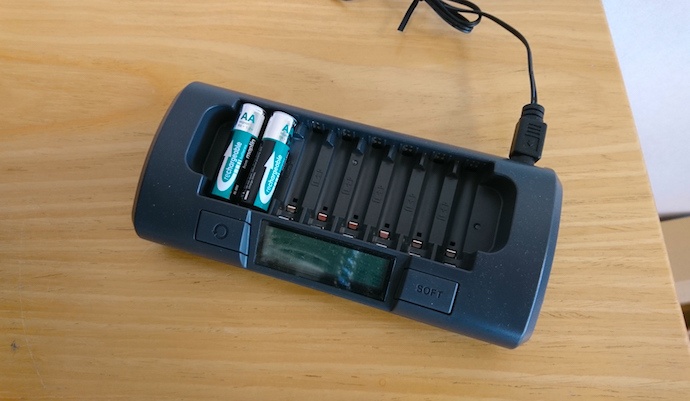 Batteries are pretty horrible for the environment, releasing harmful metals such as mercury and lead into the ground they're dumped in and taking decades to decay.

They're also a very pricey way to power your team's computer peripherals.

Instead of constantly buying batteries for your wireless keyboards and mice, invest in models with built-in batteries that can be charged via USB cable. Even better, go old-school and stick with wired peripherals — they don't look as cool, but they never run out of juice and are far kinder to the environment.

If you’re stuck with older hardware and would rather not add to the problem by throwing them away, then consider investing in some rechargeable batteries like the ones above. They’ll cost you more than a pack of single-use AAs initially, but you’ll recoup that expense in no time, and do a fraction of the damage to the planet by using them.

Unless your employees are constantly wandering the halls, taking trips to the kitchen, or popping to the toilet every couple of minutes, then it makes no sense to leave the lights on all day.

With your lights hooked up to motion sensors (some of which can also measure ambient light levels and remain off when the room is bright enough), you won’t be paying to illuminate empty spaces for hours on end, amounting to significant savings over the course of the year.

Just don't be tempted to install motion sensors in your actual workspaces: plunging your team into darkness every few minutes might save a few quid, but chances are it'll cost your staff their sanity!

On the surface of it, recycled paper towels probably seem like the cheaper, more environmentally friendly way to dry your hands. Research would suggest, however, that when you take into account their shipping and the fact that can only ever end up in landfill, recycled paper towels actually produce an enormous amount of CO2.

Installing electric hand dryers in your staff toilets will cost more initially, but modern cold-air dryers like Dyson's Airblade have been found to be not just cost-effective compared to constantly restocking paper towels, but significantly more hygienic than paper towels — reducing the spread of germs and meaning fewer staff taking sick days. 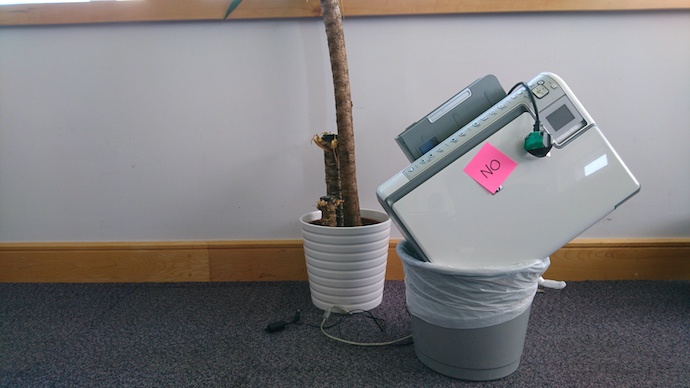 7. Put the printer out to pasture

Office printers are no friend to the environment, from the paper they gobble up to the ink and toner cartridges that take hundreds of years to break down in landfill.

With the advent of high-speed Internet connections and cloud-based software, it's never been easier for businesses to function without the need for physical copies. So ask yourself — do your staff really need a printer on the office floor?

Consider making your employee handbook available as a PDF rather than printing out physical copies. Communicate with your team via email and group chat programs like Slack. Share documents using Google Apps so that everyone involved can edit and work on them. If your staff work shirts, swap your printed rota for cloud-based rota software that keeps your whole team informed of any changes.

If you simply must have a printer in your office, make it company policy to use smaller fonts, print on recycled paper and to use both sides of the page. And remember to turn the machine off when it's not needed — there's no point having your printer on standby all day if it's only needed every couple of hours.

Regardless of whether it's a monitor, microwave, fridge or desk lamp, it pays to choose energy-efficient products from the outset.

Thanks to the colour-coded labels that all electrical goods sold in Europe are required to display, it's never been easier to shop for computer hardware and white goods that use electricity sparingly, so pay close attention to those labels when shopping for your gadgets and gizmos.

You might save a few quid by kitting your entire team out with monitors rated 'B' on the Energy Efficiency Index, but when you consider that the scale goes all the way up to A+++ for many items, you're going to end up paying more for those power-sapping displays in the long run.

9. Switch devices off at the wall

Try to switch all non-essential hardware off at the wall at the end of each day. If you work in an office with under-floor sockets, then invest in some surge protectors with built-in switches that can be easily flicked off.

Even when shut down or 'hibernating', desktop computers still draw a small amount of electricity from the wall. This is usually only around 1w of energy, admittedly, but when you have dozens of machines in your office, all left plugged in 24/7, it soon adds up.

Other devices such as TVs and printers are often incredibly power-hungry even in standby mode. Forgetting to turn them off at the wall will cost your company a small fortune over the course of the year, so get into the habit of killing the power when you lock up for the night.

Or at least let your staff work from home when they can.

Managers are often reluctant to do employ remote workers, fearing that they might be less productive and harder to communicate with than office-based staff.

In truth, however, remote workers are usually just as — if not more — efficient than their desk-bound peers, and, thanks to the wealth of software we now have our fingertips, are no more difficult to contact than if they were just down the hall.

As well as helping to ease congestion and reduce emissions, employers who allow their staff to work remotely benefit from:

Still not convinced? Check out our guide to managing remote workers — it’s nowhere near as scary an idea as you might think!

Going green doesn't have to cost money — if anything, it can help your business save money in the long-term.

With a little bit of planning, it's possible to change your workplace habits and transform your office space to become both more efficient and have significantly less impact on the environment. The key is to make sure that your entire team follow your lead and to ensure that your new energy-saving behaviours become a part of your daily routine rather than an afterthought.

Looking for more ways to improve your business? Head over to the RotaCloud blog homepage now.